St. Peter’s in Indianapolis Endures by the Lord’s Word 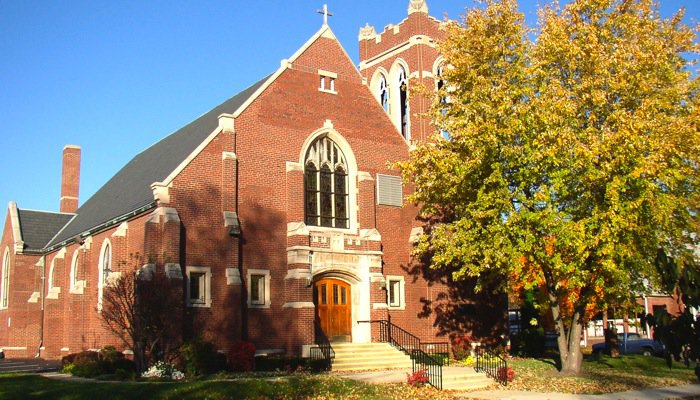 Pastor Seth Mierow was called to St. Peter’s Lutheran Church in 2008. The congregation was struggling and the surrounding neighborhood was in decline. Abandoned houses dotted the streets. Homelessness and crime were a problem. The congregation, which was over a hundred years old, had an aging population that had since moved away from the neighborhood. When St. Peter’s Lutheran School closed in 1986, families with children who prioritized Lutheran education transferred out. Over the next two decades, the congregation had fewer families and active members.

Initially, the Mierow’s first daughter was one of a few children in the congregation. How could the congregation shine the light of Christ through His Word and promises in the dark place of urban Indianapolis?

“Only through faithful preaching and catechesis, every Sunday Divine Service, and outreach to the mission field in their own neighborhood,” said Pastor Mierow.

Pastor Mierow walked the streets around the church, getting to know the neighborhood, introducing himself to the residents, businesses in the area, and the transient homeless. Many didn’t know the church was still open or thought they only did funerals. The congregation tried and “failed” at any number of programs. The seed was sown, though.

“We have a responsibility as the Body of Christ to care for the one in need, the one right before us, the one whom our Lord places in our path,” Rev. Mierow said. “In this way, we learn from the Good Samaritan, our Lord Jesus Christ, who lifts us from the gutter, cleanses us by the oil and wine of His Gospel Word of forgiveness, and brings us to the Inn of the Church.”

Pastor Mierow went to the administrator of the Head Start Program, who rented their school building, and asked how the congregation could help the 110 preschool students in their program. The answer was a Christmas program. “We were privileged to help in a time of need for the littlest ones among us. Working together with partner congregations we were able, by God’s grace, to provide hats, gloves, scarves, and a Christmas present to every student. CPH even gave us a discount to buy enough My First Christmas books for each family. The principal allowed me to speak at the program which was held in the church. I told the families, ‘We love your children because Jesus loves your children. He was born for them. He died for them. He gives them life.’”

Afterward, a single mom approached Pastor Mierow and asked for help for her pregnant nineteen-year-old daughter. That conversation opened the door to a new outreach for St. Peter’s called The Mothers’ Shop, where families can receive gently used baby clothing, diapers, and other items for free. Pastor Mierow was also privileged to baptize that little one who is eight years old this year.

In 2013, the congregation began a campus outreach at Butler University and IUPUI. “Our campus outreach developed organically,” said Pastor Mierow. “In the summer of 2012, a young lady who would be attending Butler University sought out a liturgical, confessional Lutheran congregation while in college. She was proactive and energetic and formed an official LCMSU campus group through the student government board.”

Campus outreach continues on the campuses of Butler and IUPUI, with on campus Bible study and Prayer Office once a week at both campuses and Divine Service every Lord’s Day at St Peter’s. Student-to-student outreach has led to new students attending Bible study and St. Peter’s. “Students are taking ownership,” Pastor Mierow explained. “The Word of God is living and active, it goes forth from His mouth and does not return to Him empty. Students who hear the Word, who are forgiven and strengthened through it, live out their vocation and feel comfortable and courageous enough that they invite non-Lutheran friends. We’ve had several students receive catechesis and are confirmed.” Along with the faithful campus outreach, St Peter’s has a growing number of families and young adults attending.

“Life is here,” Pastor Mierow confesses. “The Holy Spirit, through the Word, continues to call, gather, enlighten and sanctify His elect by and around the Word of Christ read and preached and His holy Sacraments rightly administered. The Lord has seen fit to establish an altar, pulpit, and font in this location for nearly 125 years. He is faithful. We at St Peter’s are privileged, as unworthy servants, to receive this life and salvation in the means our Lord bestows through the holy liturgy and to reach out to fellow sinners with the same. All things pass away. The Word of the Lord endures forever.”