Now when those hired first came, they thought they would receive more, but each of them also received a denarius.  (Matthew 20:10)

We rightly expect to be paid or rewarded for what we do.  Even Scripture says that the laborer is worthy of his wages (1 Tim 5:18). However God’s gracious gifts are in no way a reward for any of our efforts or works.  Jesus illustrates this kingdom-reality in Sunday’s parable.  In the parable we observe the master of the house hiring people to work in His vineyard. As the parable concludes we see that no matter how much time each laborer spent working, they each received a full day’s wages.  Grace doesn’t seem right. 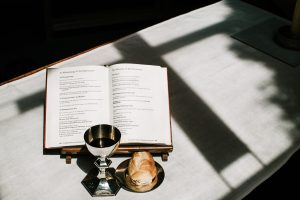 Our salvation is a gift.  It was first earned and created by God’s grace in His Son: For you know the grace of our Lord Jesus Christ, that though he was rich, yet for your sake he became poor, so that you by his poverty might become rich (2 Cor 8:9).  Christ’s grace-prompted death for us created indescribable wealth for mankind.  God in Christ created complete forgiveness and the resurrection to eternal life!

Because God is the creator of our salvation, He has the prerogative to freely give what belongs to Him (v 15).  How then would God distribute such wealth?  He does it through what we Lutherans call The Means of Grace, which is simply the Word and Sacraments. Through such means of grace we are called and empowered to believe in Christ our Savior, and thus by faith receive the gifts of forgiveness and eternal salvation.  This gracious salvation is described by Paul in Ephesians 2:  For by grace you have been saved through faith. And this is not your own doing; it is the gift of God, not a result of works, so that no one may boast (v 8-9).  We are not saved by our works.  They earn nothing.

How then does such salvation appear to be wages?  Upon being saved through His means of grace, God empowers each believer to do God-pleasing works.  Such works are necessary, but they are not necessary to save us.  Thus immediately following Paul’s statement of grace in Ephesians 2:8-9, we hear him in the same breath explain, For we are his workmanship, created in Christ Jesus for good works, which God prepared beforehand, that we should walk in them.  Indeed we are created in Christ Jesus for good works.  Because of the sinful flesh that still clings to each of us, we begin to think that somehow our works have special merit before God.  Some are led to think that an official church-worker has the most merit, and should receive a special reward; or that a Christian who has served the Lord for fifty years should receive more from God than a Christian who served for five years.  Such thinking misunderstands grace.  Grace neither looks at the amount of works created in Christ Jesus nor does it look at the supposed quality of such works.

In God’s kingdom the great works are the humble works that the baptized perform in their respective vocations.  In Colossians 3:17-22 the Apostle explains this nicely: And whatever you do, in word or deed, do it all in the name of the Lord Jesus, giving thanks to God the Father through Him. Wives, submit to your husbands, as is fitting in the Lord. Husbands, love your wives and do not be harsh with them. Children, obey your parents in everything, for this is pleasing to the Lord. Fathers, do not provoke your children, so they will not become discouraged.  Slaves [today, employees], obey your earthly masters in everything, not only to please them while they are watching, but with sincerity of heart and fear of the Lord. Whatever you do, work at it with your whole being, for the Lord and not for men, because you know that you will receive an inheritance from the Lord as your reward. It is the Lord Christ you are serving. Note at the end of this quote that we are not rewarded for fulfilling our vocations, but our “reward” is the “inheritance,” an inheritance earned and given by the grace of our Lord Jesus Christ.