Family friendly. That’s one of the best ways to describe Cornerstone Lutheran Church Fishers, which is celebrating its one-year anniversary this November. From the well-attended Vacation Bible School this summer to the huge indoor playground built right into the main gathering area of the church, Cornerstone Lutheran Church Fishers is highly intentional about attracting people to its ministry. 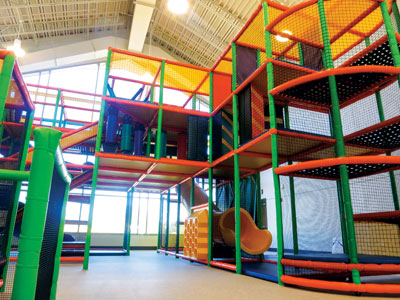 “A pastor friend of mine used to say that a church needs to act like a community center if it wants to be the center of community,” says Rev. Scott Giger, pastor. That’s just what the new indoor play space has done, creating a steady flow of traffic through the day. “The playground has definitely helped people know who we are,” says Giger. “When people hear me mention Cornerstone, the first thing they say is, ‘Oh, that’s the church with the playground!’”

Rev. Giger is quick to note that while the play space has definitely created visibility and name recognition in the community, becoming a member at Cornerstone is not the price of admission. “We want people to know that we are here to care for them in Jesus’ name, whether they come to Cornerstone or not.” That said, he has overheard several children ask their parents, “Can we go to church here?” Dozens of people have joined the congregation as a result.

“Most of the people who have started coming to Cornerstone Fishers have some church background,” says Giger. “The primary group of people we reach is those who might have lapsed at their church and are seeking something to reinvigorate their faith. They are typically families with young children. The secondary group is retired people who are here because their grandchildren are here.”

In addition to the new families, over half of the Fishers congregation used to drive 40 minutes to Cornerstone Lutheran Church Carmel each week. “These people love the fact that they can invite their neighbors to church now,” says Giger. In all, over 400 people attend services each week, and that number continues to grow.

“The highlight of this experience for me has been all the people who embraced this mission,” says Tiger. “Carmel is a strong congregation, and that spirit has carried over to Fishers quite well.” He also credits the Lutheran Church Extension Fund, which was willing to invest in the mission with the largest loan in its history. “This has been a full church effort,” he says. “It’s all about people wanting to see others connecting with Jesus, and that’s being lived out here in a big way.”