The Pharisee and the Tax Collector

The gospel for this coming Sunday (Twentieth Sunday after Pentecost) is Luke 18:9-17. This text has two narratives. The first is the parable of the Pharisee and the tax collector and their prayers. The second segment sees Jesus rebuking his disciples for their attempt to keep the children from him. Both really have to do with the right attitude toward Christ and his work.

The contrast between the Pharisees and the tax collectors is at its starkest in 18:9–14. These two groups have been representative of those who receive Jesus in faith (tax collectors) and those who reject him because he does not meet their expectations (Pharisees).

As in 18:1, Luke begins with a very direct introduction that reveals the point of the parable. The parable itself is directed against those who fit Jesus’ assessment of Pharisaic attitudes: “to some who were trusting in themselves that they were righteous and who were despising others” (18:9).

The Pharisee prayed with respect to himself. He makes a long list of his merits as compared to others, especially the tax collector he sees in another part of the temple. He wants to enter the kingdom of heaven on his terms. He did not have thought of praying but only to laud himself.

The tax collector does not plead his good works but the mercy of God in forgiving his sin. He reminds one of the beginning of stanza 3 in the hymn “Rock of Ages, Cleft for Me (LSB 761) where is it stated “Nothing in my hand I bring; simply to thy cross I cling.” God counted him to be righteous, i.e., his sins were forgiven and he was credited with righteousness—not his own but that which comes from God.

In the second portion of our text we find the disciples trying to turn away parents with children. Their effort may have been well intentioned, but it draws a severe rebuke from Jesus. These children were very young children, babies in fact. They represented the same meekness as that of the tax collector.

Jesus includes children in His kingdom and teaches that we must be like them to enter the kingdom. No one has a greater claim to the kingdom than a newly baptized infant, whom Jesus welcomes with loving arms—that is grace. (TLSB)

Prayer: Dear Lord Jesus Christ, help me to only cling to your cross as the sure salvation. Help me to rejoice in your means of grace and to constantly remember my baptism. Amen 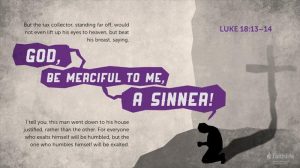